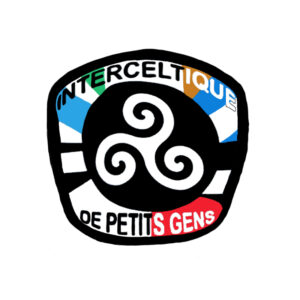 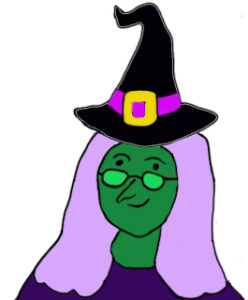 Interceltique de Petits Gens online festival is being held in Guernsey this year. I will be giving you a daily report of events. Each region and nation is sending a fairy folk delegate. We have a range of guest speakers and musicians. Starts Saturday. 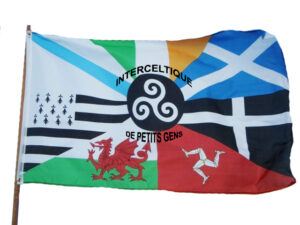 Who were the Celts?

The Celts lived a long time ago during the Iron age, before the Romans. They shared a common language.

We have a few visiting countries who are not strictly from the Celtic tradition but the fairy folk are related. These countries are England, Guernsey and Jersey who also share their fairy folk ancestors with the Anglo Norman.

We have 11 countries represented at the conference today - all of whom have sent a lead delegate to speak.

For the opening ceremony we sent local flags to the fairy folk and asked them to send us a photo. Oh dear! Someone has sent the fairy folk Human size flags. Never mind - we will get to see what they look like later on.

Can you identify the flags.

Starting in the left hand corner: 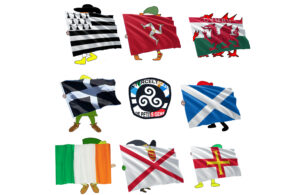 These regions came late to the festival:

The first discussion at the festival is a COVID-19 report from the regions. The Guernsey pouques realised that the fairy folk could see the crown virus balls being breathed out by humans so they could help them identify who had the disease

We have just finished with our first speaker. P'tite Jeanne explained how the Guernsey pouques changed in seagulls (maoue) and pooped on the humans who had the virus so they could self isolate. 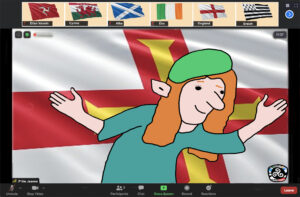 The fairy folk across the isles have some very inventive methods of letting the humans know that they have the virus. The Ghillie Dhu have magic fairy bagpipes which they play. Anyone who hears the sound has to self isolate. Sadly the humans are now ignoring the advice. 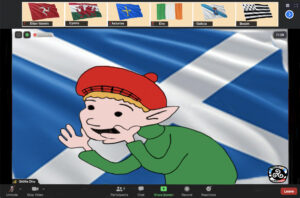 Here are some of the other ways that the fairy folk let their humans know that they had the virus:

The English Faeries sprinkled fairy dust on the crown virus balls to make them glitter.

The Irish Leprechaun pulled the humans hair. They found this difficult though for bald people.

The Isle of Man Mooinjer veggey stamped on humans toes. They were not very popular for doing this.

The Brittany Korrigan sprayed the person with odeur d'ail (garlic odour). The virus often means you lose your smell but the humans could always smell the garlic.

Jersey Lil, the witch from Jersey, gave humans with the virus a green tinge on their skin which only disappeared once they tested negative.

The Welsh draig (dragon) breathed fire on the humans, but their hair kept catching on fire so he was demoted from the job and the Welsh Pwca took over.

The wolf fairies from Galicia licked the humans skin. When the human felt a small wet warm feeling on their face they knew they had to self isolate.

The Cornish piskies put a glowing spell on the humans and they did not stop glowing in the dark until the virus had gone. 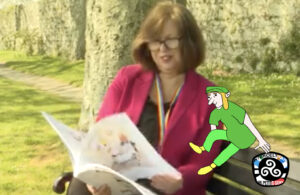 The fairy folk are in for a real treat tonight at the Interceltique de Petits Gens festival. Our very special guest, Dr Nicola, is here to read them a bed time story. Have you all had your cocoa and are you all tucked up in bed? Goodnight.

Today is folklore day. Our visiting speaker is Dr Francesca from Jersey. A legend states that the people of Jersey made a bishop so unwelcome that he moved to Guernsey. He sent all the ugly snakes and toads to Jersey, which is is why Guernsey has no toads and Jersey has crapauds.