This poetry competition took place in the Spring Term 2020 before lockdown.

Congratulations to all the finalists- there were 110 entries in all and 500 online votes to decide the overall winner. 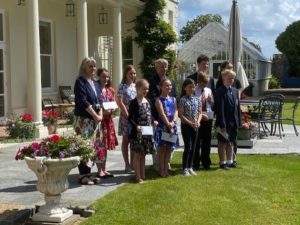 The OGH have very kindly offered afternoon tea for the family of the overall winner to add to the prize.

I am very pleased to announce that there is also a school prize for the quantity and quality of entries to this competition. This prize is awarded to ELizabeth College Junior School.

All poems were read out on the JKT show on Radio Guernsey on Thursday 16 April 2020.

A short introduction by JKT

An interview with the organiser, Karen, on the JKT show.

A good poem tells a story and the theme is Occupation and Liberation in the Bailiwick of Guernsey. The poems are in alphabetical order with the overall winner's poem first.

to be evacuated to safety,

We hoped to see them soon,

Before the Nazis arrived to stay.

On the 28th June the Nazis flew over,

their bombs as they came,

People ran and sheltered in cellars,

On the 1st of July they took over,

through our streets in their droves,

With loaded guns ready to fire,

Innocent people were left in dismay.

They imposed their Nazi rules,

everything we would say or do,

Forcing us into hiding,

All we could do was pray.

We lost a large number of houses,

Leaving some homeless and desperate,

With everything taken away.

No allies could come in or out,

Leaving us feeling somber and grey.

We were trapped with limited food,

for every scrap we could find,

Black market deals were an option,

If only we could pay.

For 5 long years this lasted,

this misery will end soon.

Waiting for our Liberation Day.

Liberation by Sebastian Banneville from Beechwood

At the moment we are occupied.

The entire Island is terrified.

We are trapped on this Island, hungry and cold

All the soldiers fighting brave and bold.

But then my radio sounds, Britain has taken Europe over.

I get on my bike and go to my friend and tell him the war is over.

And the next day the British boat is here.

I run all the way down the pier.

The British flags are raised.

I am feeling very dazed.

Once they have signed the papers, the Germans flee.

The whole Island cheers with glee.

Time after Time by Zoe Collins from Melrose

The day had come; war had started,

I could taste fear in the air.

The guns were already shooting.

I was four. My parents told me

to get packed for a journey.

I had only packed a few things

Before the sun was no more.

People were queuing at the harbour

Screaming at the boats, babies bawling

Mum took me to the teacher.

I was taken away

I never saw her again for years to come.

The next moment I can remember

Was on a rocking boat sailing

away from my beloved Guernsey

I didn't know what the soldiers

Would do to them.

My teacher was as strict as ever,

I was so downhearted to see the island

disappearing from my sight.

After five years of German

But I hardly recognised

those strangers who were my family.

You are Free by Seb Jennings from La Mare High School

Unfortunately we have not been able to contact Seb. JKT is still keen to have him on her show to read the poem.

Do what you want,

You’re in a camp,

Watching the world go by,

Dreaming to be free.

You were being starved,

Now you can eat freely.

Your summer holidays are free,

Do what you want,

And watch the world go by,

You have been liberated!

The boat was rocking, my feet unstable,

My leather boots, too big.

All I wanted was my mother,

I had no choice we all had to go.

The stench of smoke was unbearable,

We marched down the road,

Fear etched on all faces,

I wasn't to know what we had done,

What misery and pain we had caused,

They rebelled, our signs turned,

My job was to kill,

I did not want to,

My heart would shatter,

As the trigger I pulled.

We took what wasn’t ours,

We stole and rationed those around,

We lived in splendour while others,

Struggled on the cold ground.

My freedom was found,

We piled our guns,

A black pile of death on pain.

We were imprisoned in England,

Before we returned home.

Dreading what I would find.

Forget that Day by Harry Snell from Elizabeth College

The dreaded trench whistle was blown,

Everybody knew what that meant.

The arrogant were the first that leaped over the wall

They were shot, impaled by the bullets of all

They crashed to the ground like a fork dropped on the floor With that horrible sound.

I wish I could forget that day.

Pandemonium struck as the ‘weak’ were killed;

You could hear their wails and need for help.

On soft soil, coated with blood, his pale, white face said it all

Why didn’t I save him?

I wish I could forget that day.

The ignorant cascaded down to their death

You could see their spirits illuminate as they levitated up to god.

If you listen closely, really closely,

You could hear the faint sound of Ares cackle

And the scowl of Aphrodite.

I want to forget that day.

I felt my knees start to tremor.

Forced against my own will to do this

Reluctantly, I pulled the trigger.

Red liquid spurted out of his chest.

I saw his soul rise as mine went down.

None of us were victorious that day,

I’m haunted by the stress of death.

Shot in the leg for the life that I’ve taken.

I still hear his scream…

It’s ringing in my ear.

Why won’t you let me forget that day?

Not a word was spoken,

After those fateful times.

Or candles being lit,

Only brown doors to look at

I stay tranquil for years.

I watch the hinges slowly move,

And suddenly I chime with pride,

With no rules to abide.

The air smelt of freedom,

Tasted of a new beginning,

As our dear Channel islands;

Liberation by Carmen Walsh from The Ladies' College

At last the sun shines over Guernsey,

At last our people are free,

happy as could be.

At last our people shall suffer no more,

At last we can foresee,

At last we see the light of day,

A joyous place to be,

A new, exiting, loving place for you and me to see

No fighting, No sadness,

No evil no more.

We shall never forget this merry day

In which the sun shone over us,

In which the terror was over,

A few adults sent in some poems to support the schools' poetry competition. These were not judged but were going to be on display in the tent on Liberation day.

Salutes and manoeuvres are dutifully made.

“And our dear Channel Islands are to be freed today. Long live the cause of freedom. God save the King.”

Joyful celebration of peace on earth.

Remembering - a long time ago,

A freedom emerged from despair so low.

“The years of darkness and danger in which the children of our country have grown up are over, and, please God, for ever.”

Young and old travel back through the years.

The spirit of Sarnia community brings.

“After nearly five years of German occupation, the people of your Bailiwick of Guernsey respectfully beg your majesty to accept their humble duty and their unshaken loyalty.”

“So hats off for freedom and coats off for work. There is much to do in settling down to the new order of things in Sarnia Cherie.”

Colourful end to a fabulous day.

Seventy-five years ago we lived
in fear. Menfolk absent or obeisant:
we women uncertain, scared
yet brave.
What courage it took to live a daily life
cheerfully for children.
Liberation brought
the freedom
to live our lives unfettered
once again.
Be thankful.

Such jubilation – free at last
from German domination.
For five long years our every move
under scrutiny, our lives stolen.
Yet liberation did not come to all.
We grieved
for those still imprisoned in a foreign land.
Even more
For those lives
snatched early.

Freedom lifts our spirits.
Memories of loss
remain.
Our present
still haunted by our past.
Never forget the sacrifices
for freedom.

They are coming. Make a choice,

Stay or go. Boats are waiting.

Guernsey folk a threat to occupiers.

Herded on to boats for Germany.

Crystal sets speak of an end in sight.

Boats disgorged new soldiers. Can it be?

We meet this special day.

‘Would you share a wartime memory’? our older folk were asked,

wise eyes and worn lips smiled and gave short snapshots of those times past.

We’ll record them as they’re given, not force poetic form

Repeat the hard-given memories of each child’s time in war.

A pattern soon emerges as memories roll back years

A list of child-like recall, of sights, smells, sounds and fears.

My first taste of Bananas, going to the soup kitchen, sweet rations, tins of milk, nettle tea, apple fruit, corned Beef, hops, ripe tomato, smell of boiled potato skins, eating my pet rabbit, screaming doodle bug, silence,  air raid siren, exploding windows, airplane engines, rumbling trains, smell of trains and metal bomb explosion, sleeping under tables, running to the air raid shelter, patterns of search lights, unexploded bomb on the roof, being thrown over a wall to next doors shelter, Neville Chamberlain on a Bakelite radio declaring  War, marching feet, two brother’s finding a German dinghy and a mine that went off, German soldiers in our kitchen putting their large gloves on our oven, being picked up and frightened by a German soldier, only to be shown a photo of his son, leaving by boat with Mum and leaving Dad behind, prisoners, Trams passing The Royal Hotel, travelling at five years old, Cousin had a baby by a German

‘Would you share a wartime memory’? our older folk were asked,

Wise eyes and worn lips smiled and gave short snap shots of those times past.

All my friends went away today.

They boarded a boat and sailed away,

Once they were gone, the Germans arrived.

It was years before I saw them again.

Me and my brothers went away today.

We boarded a boat and sailed away,

leaving our parents behind.

Once we arrived, we were all split up.

It was years before I saw them again.

Me and Mum went away today.

We boarded a boat and sailed away,

leaving my Dad behind.

Once we were gone, the bombs rained down.

I never saw my Dad again

In 1940, 5200 school aged children were evacuated from the island in the days preceding the German Occupation. Many of them travelled alone, but a few parents chose to evacuate with them.

Among the children that evacuated were my mother, her four brothers, my father and his mother. My parents were both 5 years old.

My paternal grandfather who stayed on the island was a Constable in the Guernsey Police. He was killed in the air raid on the 28th of June 1940 aged 33. 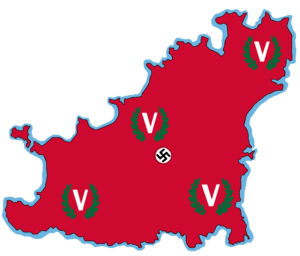 All the poems that were sent in for this competition can be found here: